Disclaimer these are not my recipes I just have to share them because they are so stinking good!!
We have started to attempt to venture out in our food and try different things. If you’ve been around long you know that Italian used to be all the time in our house, but pasta, while amazing, is not something that we should be eating every night. We do Chinese(ish) often as well, so we went a little different and tried some Indian food.
While in culinary school I made a lot of Indian dishes and enjoyed most of them but by far my favorite was Butter Chicken. I have since lost that particular recipe and had a hard time finding one that looked right.  I found one and realized I would have to buy a lot of spices that would very rarely be used, and would cost a lot. So I put off making it. While at the store I saw a seasoning pack for butter chicken that all the spices needed listed in the ingredients. I was so excited to try it. All you need to add is the chicken, an onion, butter and cream. SO easy!! 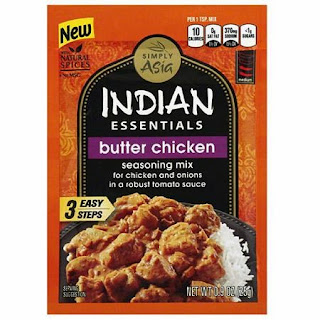 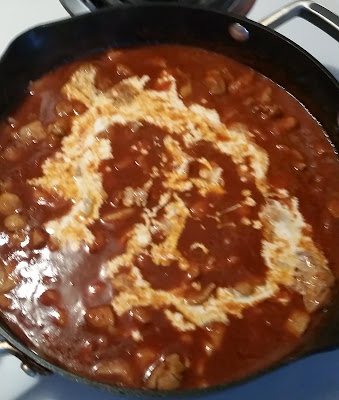 Adding the cream into the chicken mixture.
For the naan I didn’t even know where to start to find a good recipe. I stumbled upon a fellow Arkansas Women Blogger though recently who shares her family’s Indian recipe, so I knew her blog would be a good place to start. Its titled Whitbits Indian Kitchen, how cute!  Her naan recipe can be found here.  I did change it a bit, omitted the yogurt and used a little less melted butter in its place.
Naan
2 cups white flour
1 pack of active dry yeast
1 tsp salt
1tsp sugar
¼ tsp baking soda
2 tbsp oil
2 tbsp butter melted
¾ cup water between 105°F-110°F
Combine yeast and hot water and let sit until there is a nice layer of foam on the top, about 10 minutes. In a bowl combine first 5 ingredients. Add in the oil and butter and mix to form crumbs.
Add in the yeast when ready and stir to combine. Knead until soft and not too sticky, you may need to add some more flour.  Put some oil in your hands and knead it into the dough.
Cover and let rise for a minimum of 2 hours up to 4 hours. (Mine was a little under 3) Make sure the dough has doubled in size. 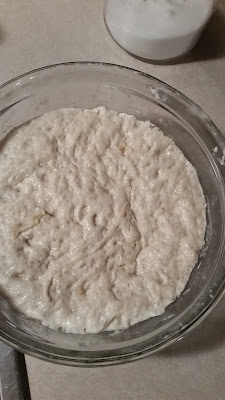 After the dough has risen.
Divide into equal parts how ever big you want. Flatten the dough and shape into an oval and put each side on a floured surface to coat. Don’t make them too thin or they will burn in that spot.

Put a pizza stone in the oven (if you don’t have one use a flat pan, stone will give you best results though). Heat oven to 500°F. Take the dough when your about ready to start eating and knead for 5 minutes.

Pull the rack with the stone on it out far enough to reach the back of it, lay as many as you can fit on and quickly close the oven. Let cook for about 2 minutes depending on the thickness. I did mine for about 3 and then broiled for about 45 sec on high to finish off the color. 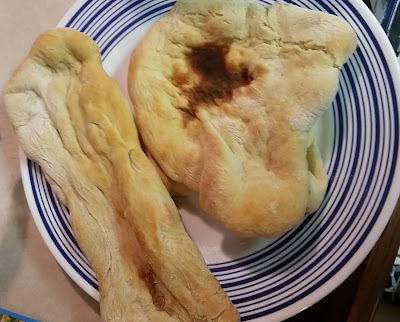 This one got a little darker in the thin spot.
Then you have the wonderful fluffy naan. It tastes a bit like a fluffy saltine cracker. We loved it! 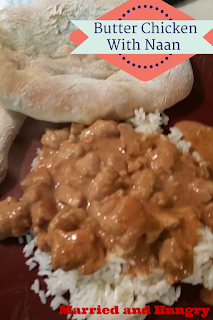