Last week a new Chuy’s opened in North Little Rock, I was able to go in during their charity event and get a full tour of the restaurant and learn about them.  If you don’t already like Chuy’s I hope this post will change your mind, because it impressed the heck out of me.

Let’s start with some of the things that makes all Chuy’s similar. Now I say similar because not one Chuy’s is the same as another but they do have a few things in common. Like the Elvis shrine, this shrine is located in the entry way and you can not miss it. Every Chuy’s has some type of Elvis shrine, on a bar, in a both, the entry or even in some corner where you don’t think to look. This all started when they opened the first restaurant and only had $40 to decorate so they went to some pawn shops and thrift stores and found pictures and one of them being a large picture of Elvis. They had it above the bar and soon they had collected things to go with it. People thought it was a thing and started sending in all different Elvis things. 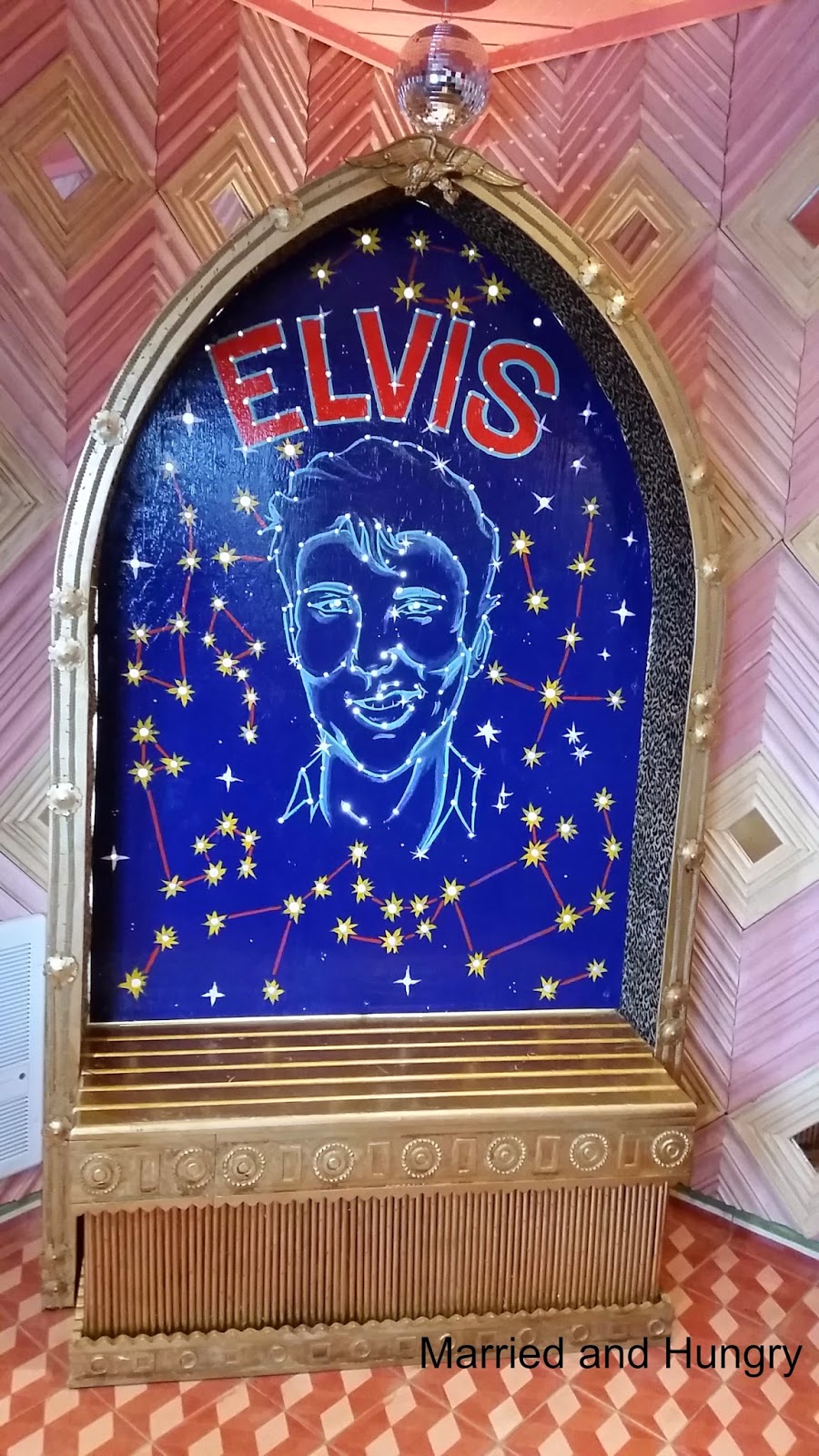 The Fish, each restaurant has hand carved and painted fish hung, some have 300 some have 2000. This location has them in the bar guiding you into it and onto the dining room, they used 980 fish here. This started when the founders were going through Mexico figuring out recipes, they saw a family making fish and asked if they could have a thousand in a couple months, when they came back they were ready to go. The same family still makes them today. 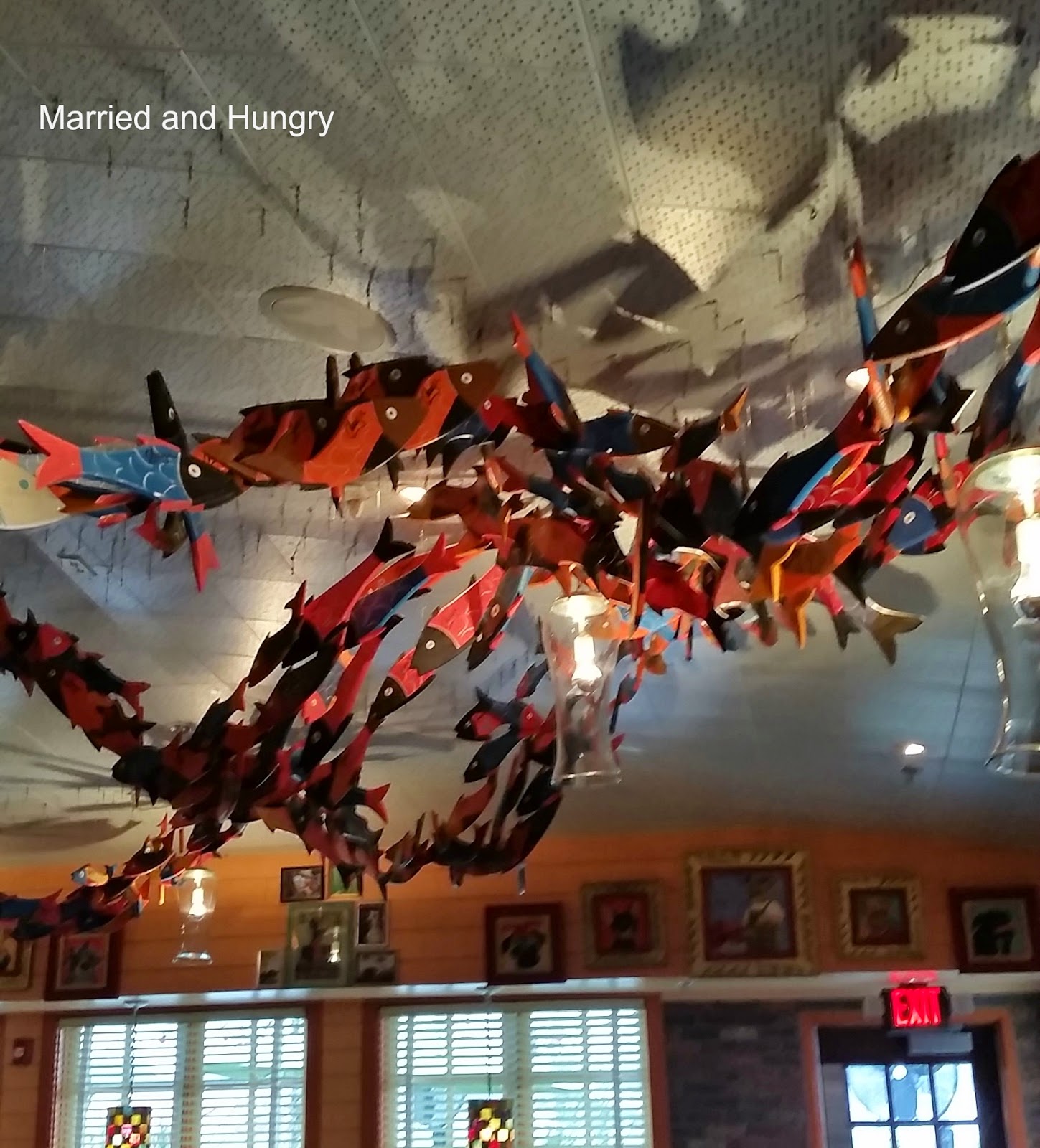 The hubcap room. Every Chuy’s has a room that the ceiling is covered in hubcaps. This is one of my favorite rooms. 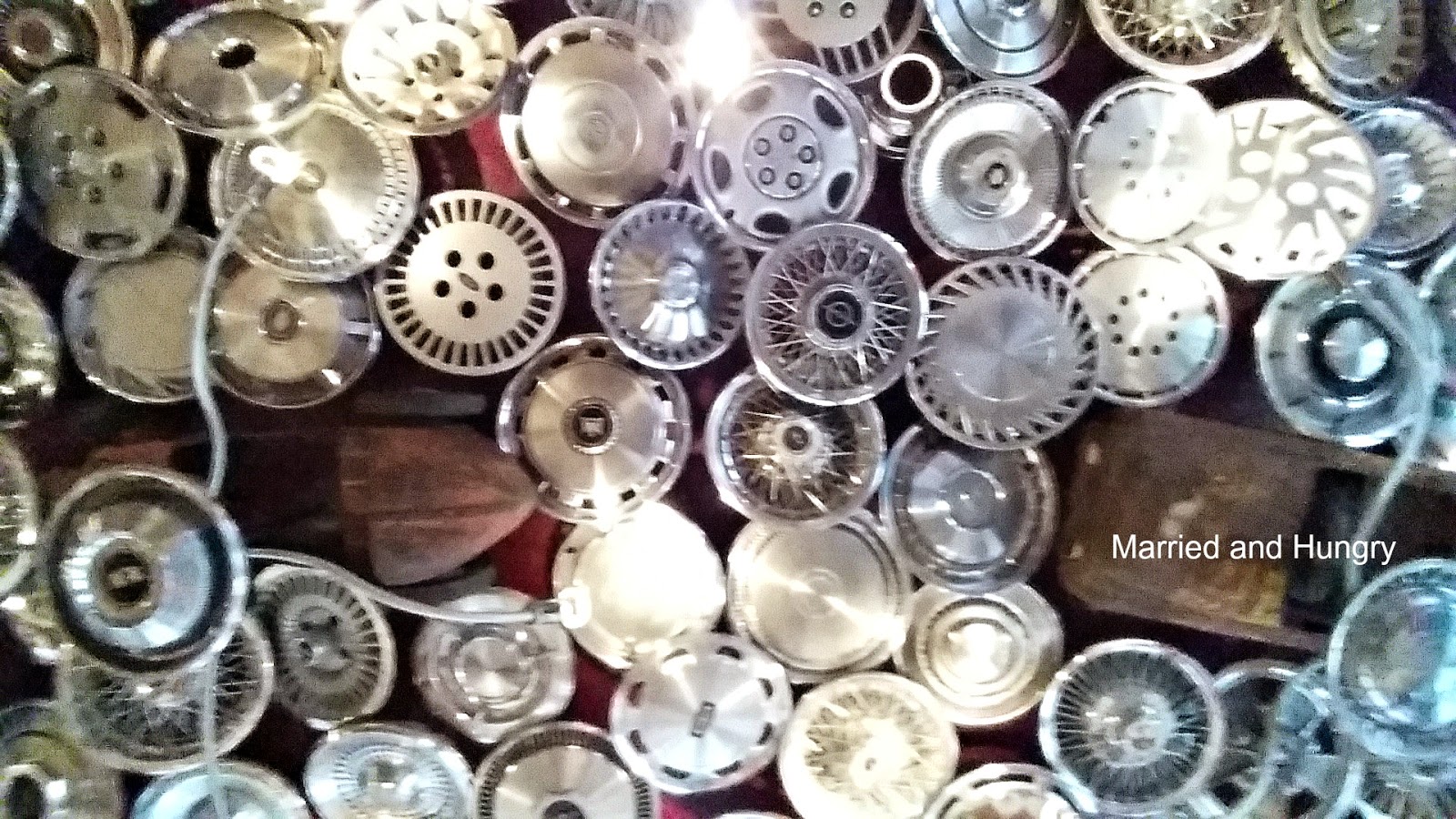 The floor is messed up. As the workers lay the tile they will intentionally mess up the pattern or lay in a blank tile. I found 4 wrong tiles while we there. 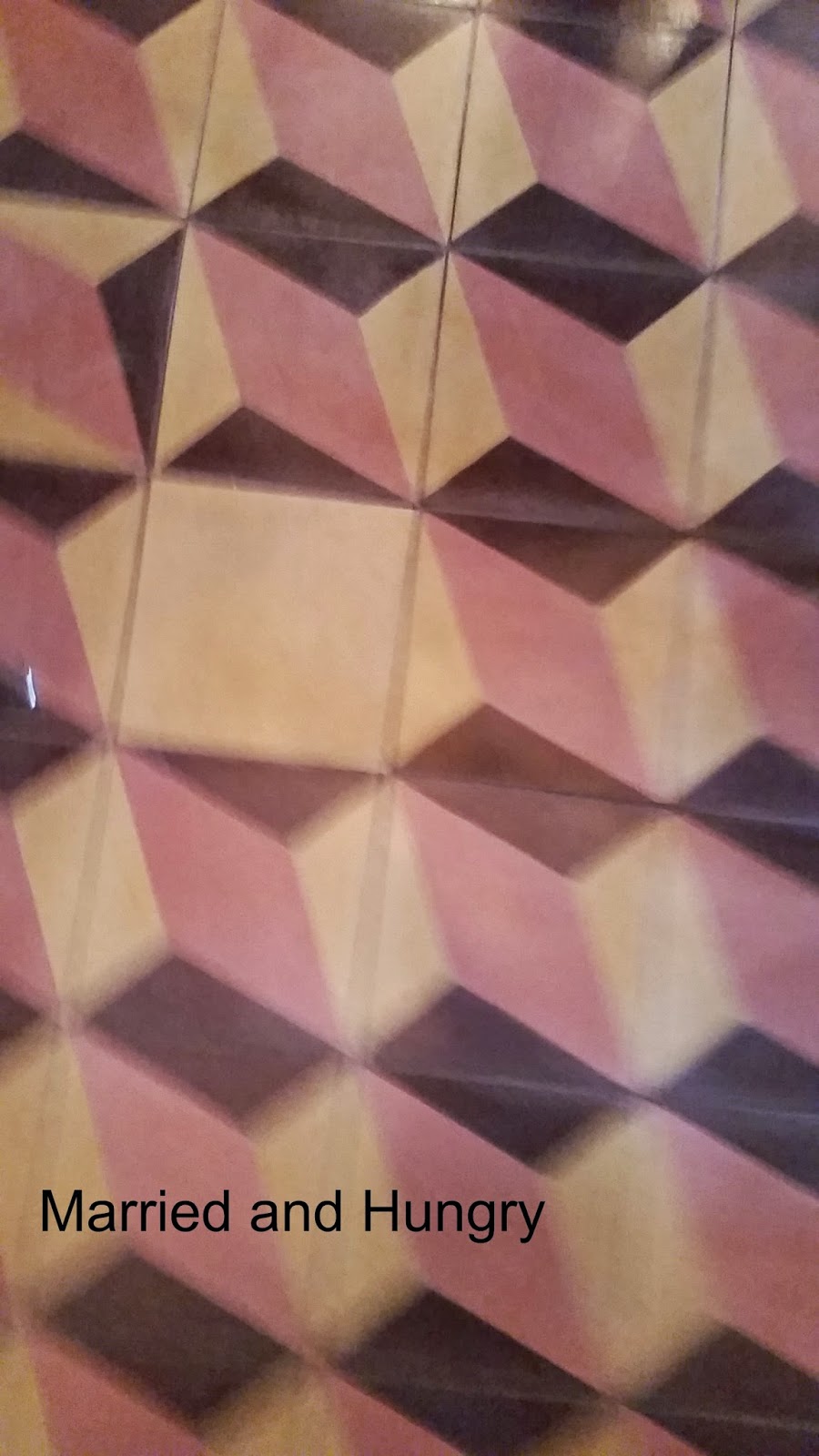 The dog wall. In the bar there is a wall full of dog pictures, these are local dogs. How did they get so many local pictures you may wonder. Well they hosted an event at the local Pet Co partnering with Humane Society of Polaske county, paid the adoption fees, and every pet adopted got a picture on the wall as well as other dogs that came by. Did you know that you can bring a framed picture of your dog and they will hang it up on the wall, at any Chuy’s, Tesla will be up their soon. 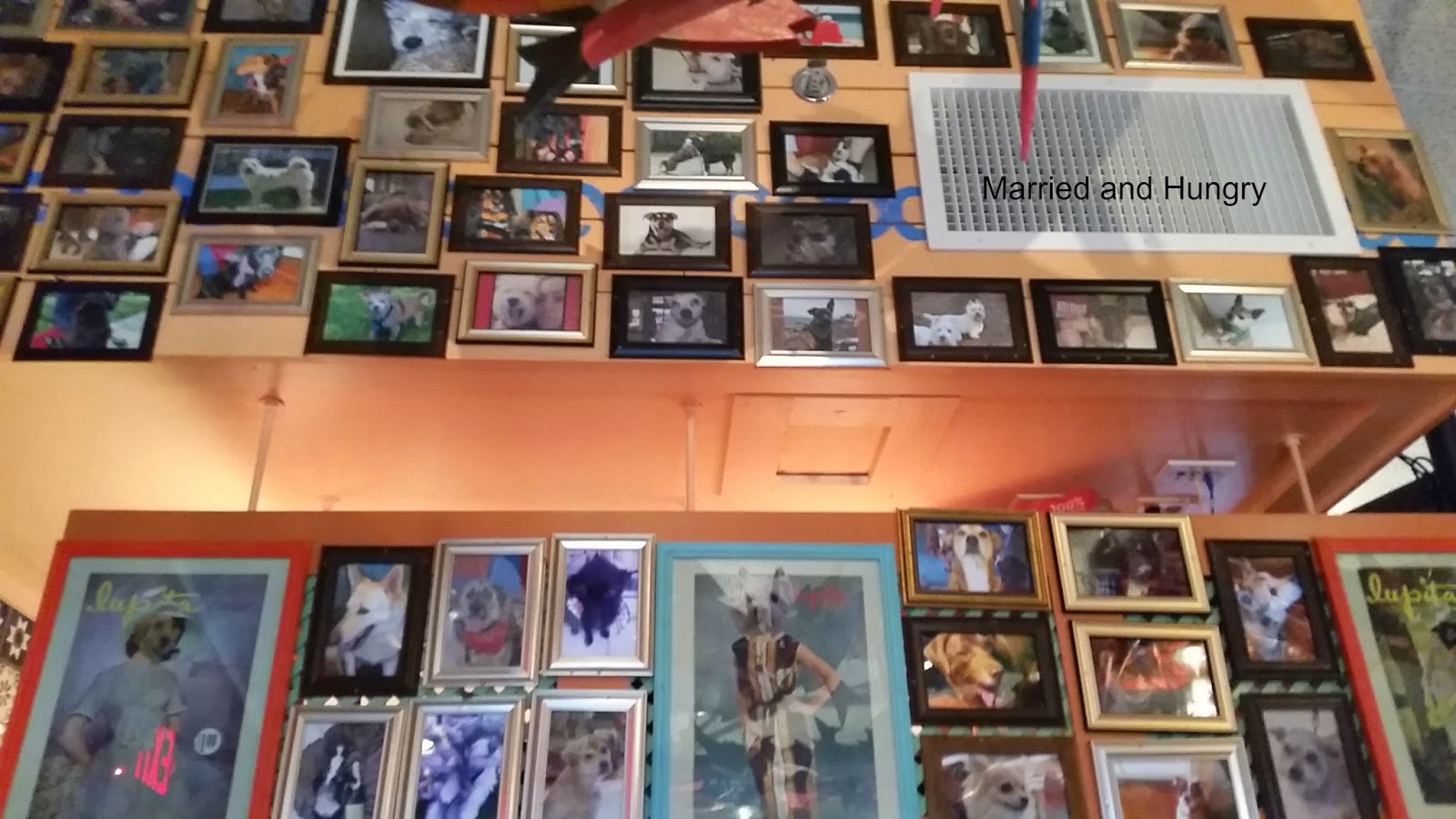 On to the food, this place has some amazing food! It’s hard to even find a place to start talking about it. They make every thing fresh, all day long. That means they don’t make a large batch of sauce and chill it and reheat as needed. They make it when they start to run out they make some more. Same with rice, they make it as they go, only prepping the add ins and then adding the rice to cook when it is time. In a restaurant chain this large, with how busy they can be this is a big deal, and really impressed me. 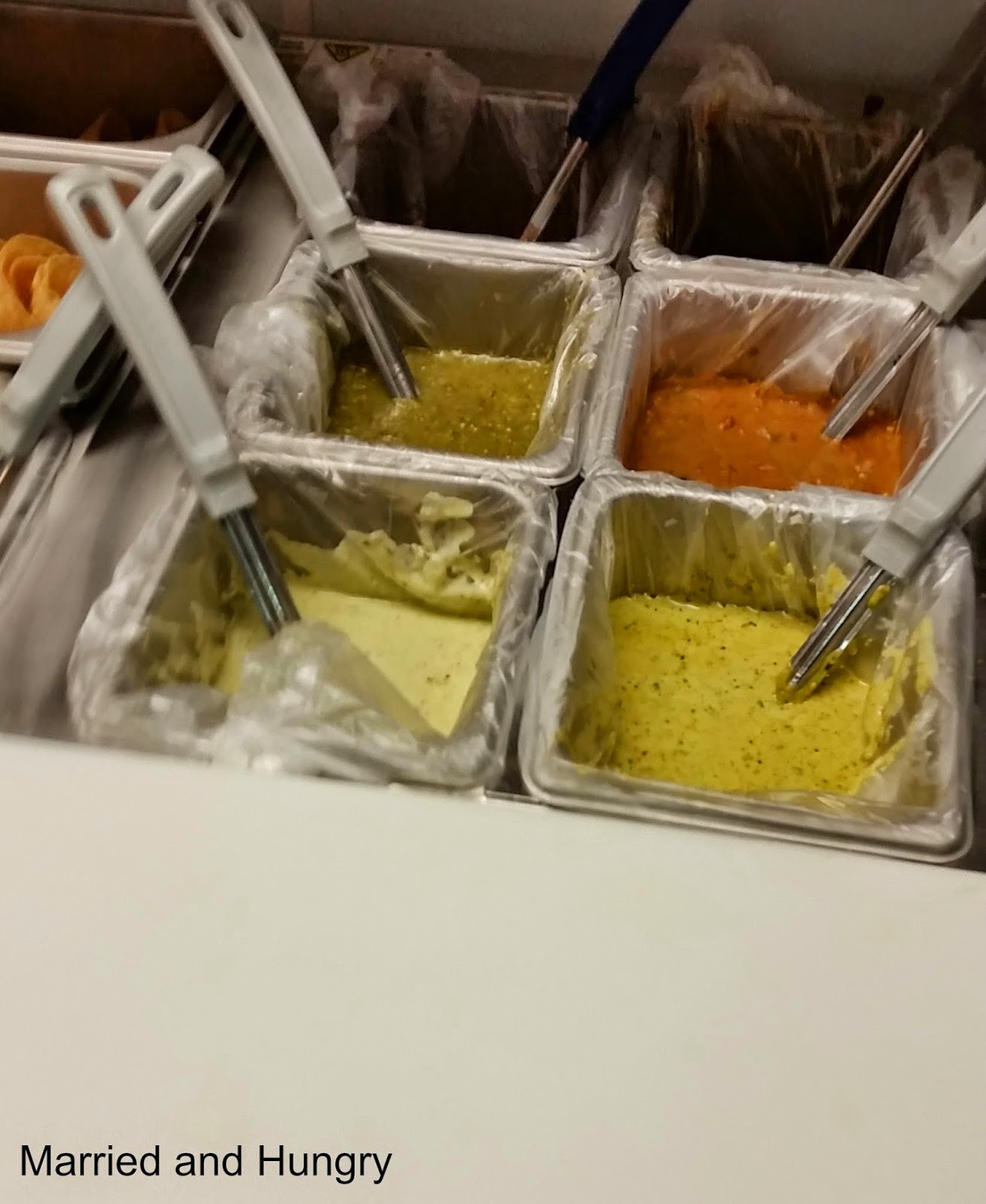 They have a walk in cooler that is stuffed full of fresh produce! They receive 60 pounds of tomatoes A DAY. They also grate their cheese in house each day, they go through a lot of cheese! The freezer is tiny, in all Chuy’s and this is something they love to share, the freezer holds kids ice cream and French fries, that’s it I think if they serve to kids they wouldn’t have a freezer at all. They roast their chicken all day and hand shred it, it is some good smelling meat.
Chips are fried in house, speaking of frying they have a very small fryer. It is used for chips, fries, and the fried entrees they serve which isn’t to many, but each thing is fried individually and not in large groups.  Their tortillas, which make my mouth water when I think about them, are made from scratch they come to them as a bag of flour. They make them fresh all day long and you can even watch them cooking them. I would eat a stack of these and not even think twice.
We got to have a sampling of all their sauces. They were all delicious but my favorites were the Deluxe Tomatillo, I tasted it and wanted it on an enchilada right then. And the ranchero it was such a good roasted tomato and chili flavor that I wanted to keep eating and eating. We tasted these with their great tortillas and chips from the nacho bar. During their happy hour from 4-7 each day you can get complimentary nachos from their nacho bar in the bar area. You can get refried beans, taco meat, cheese, salsa and of course chips, definitely the best time to hit Chuy’s after work! 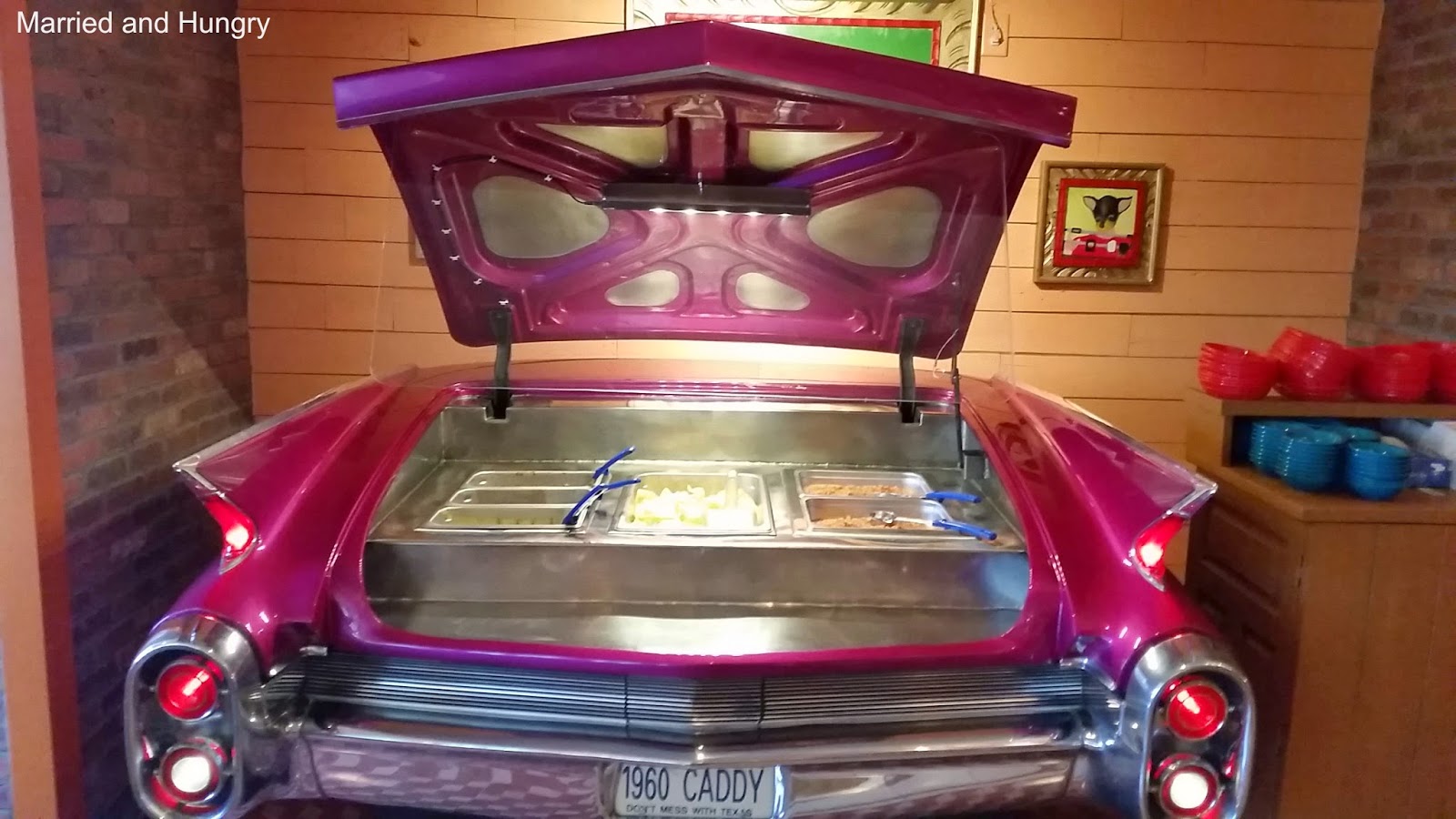 We got an appetizer sampler as well which is a ton of food, perfect to share with a group of friends before dinner. It has Chuy Nachos, Chicken Quesidillas, Flautas and Queso. All of which are delicious!  At this point we were stuffed and still had dinner left to go! 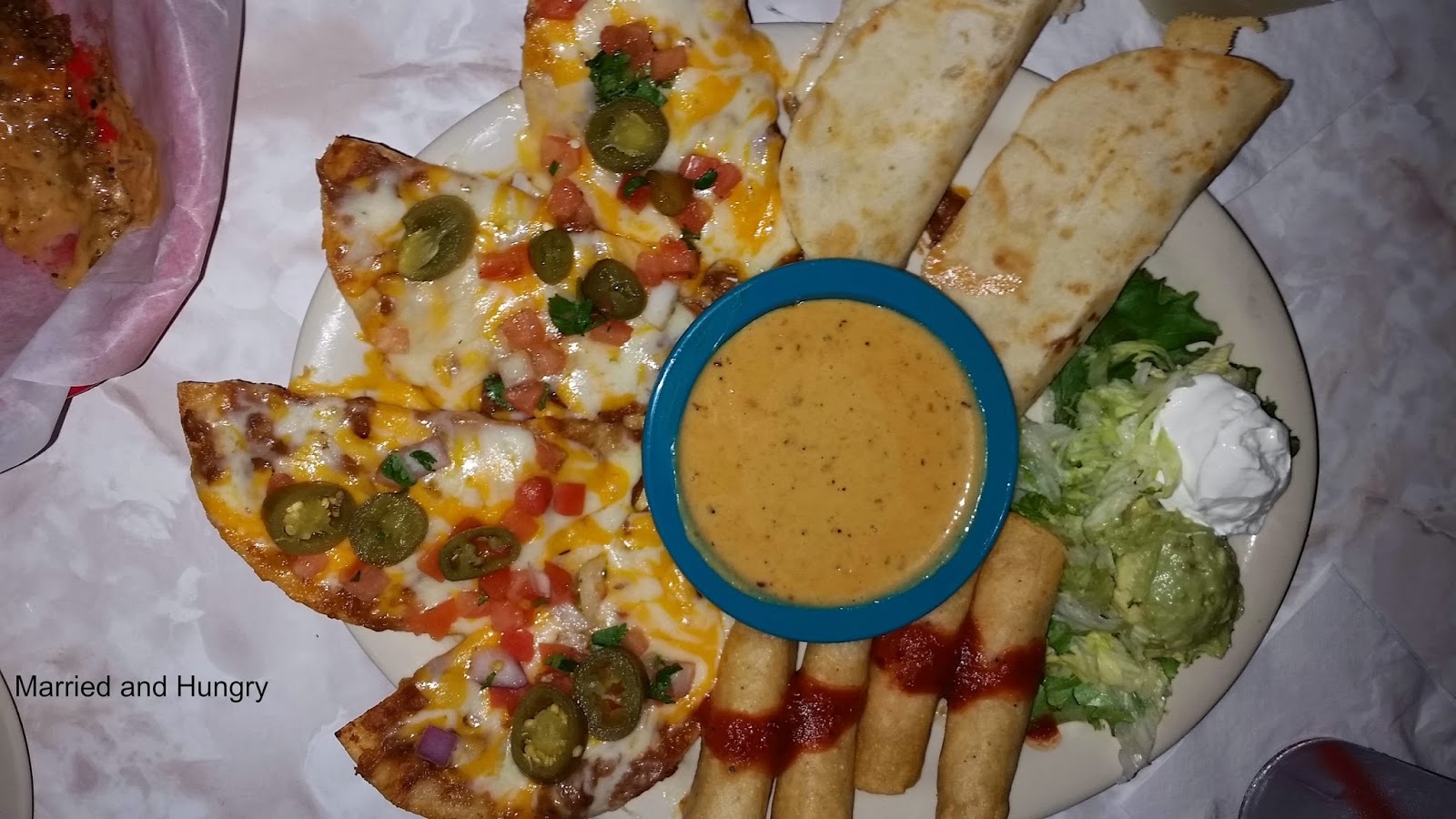 I ordered chicken enchiladas with the green chili rice with of course deluxe tomatillo sauce on it. Hubby ordered a chicken burrito with hatch green chili sauce which was his favorite. 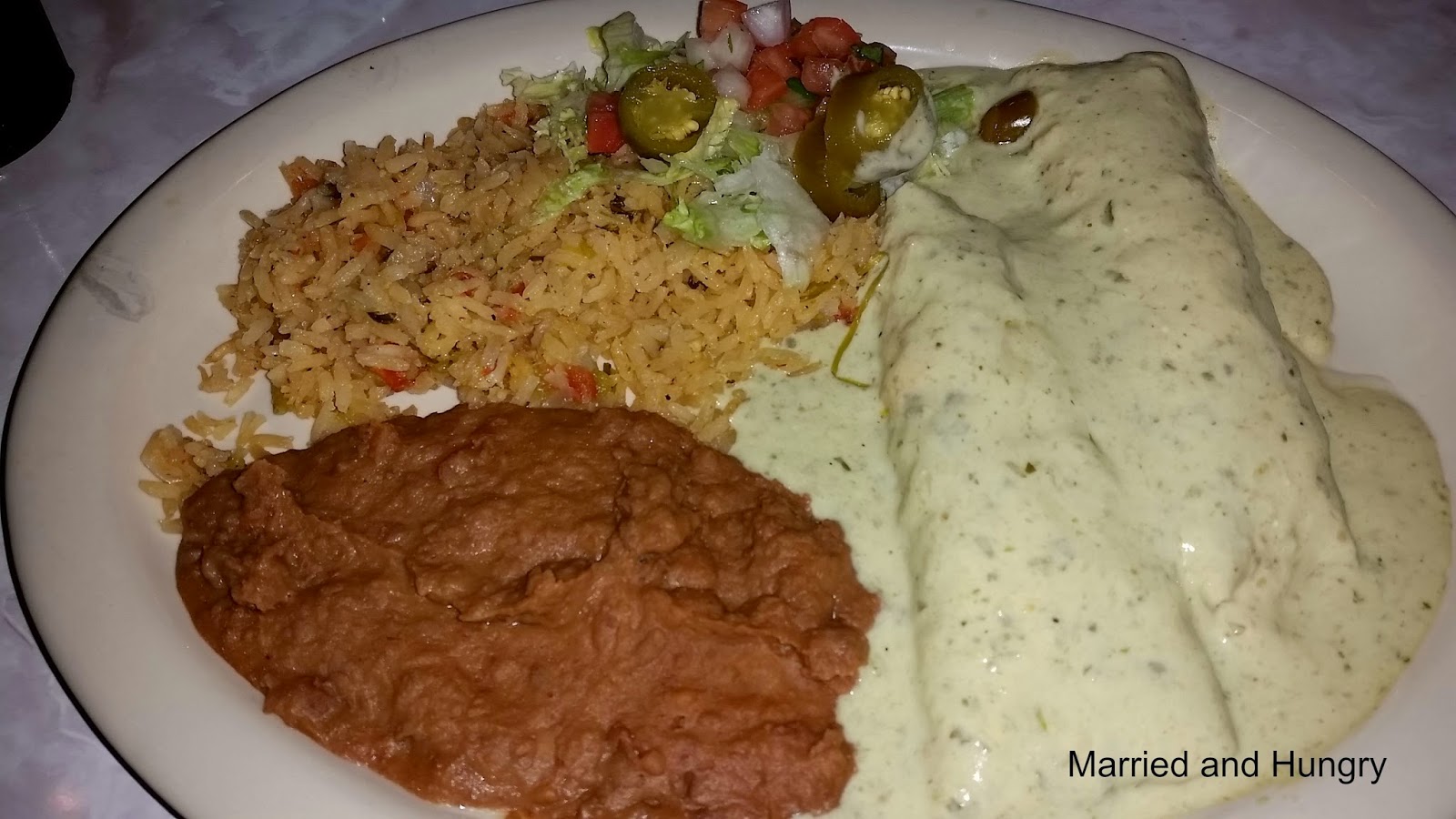 Even though we could not finish our food and had to take it home I had to try some dessert. I mean what good is stuffing your self full and then not going all out and getting dessert. We were both so glad that I just had to try the Tres Leche Cake. That should be all I have to say, Tres Leches, it was really that good and you just won’t understand until you go try it. A huge slice of moist amazing cake soaked with who knows how much milk, is served on top of a bed of whipped cream that taste like the frothy just barely melted part of ice cream, then caramel is drizzled on top for both looks and to make it taste even better. It was haven and we ate all of that and I could really use some more of it now. 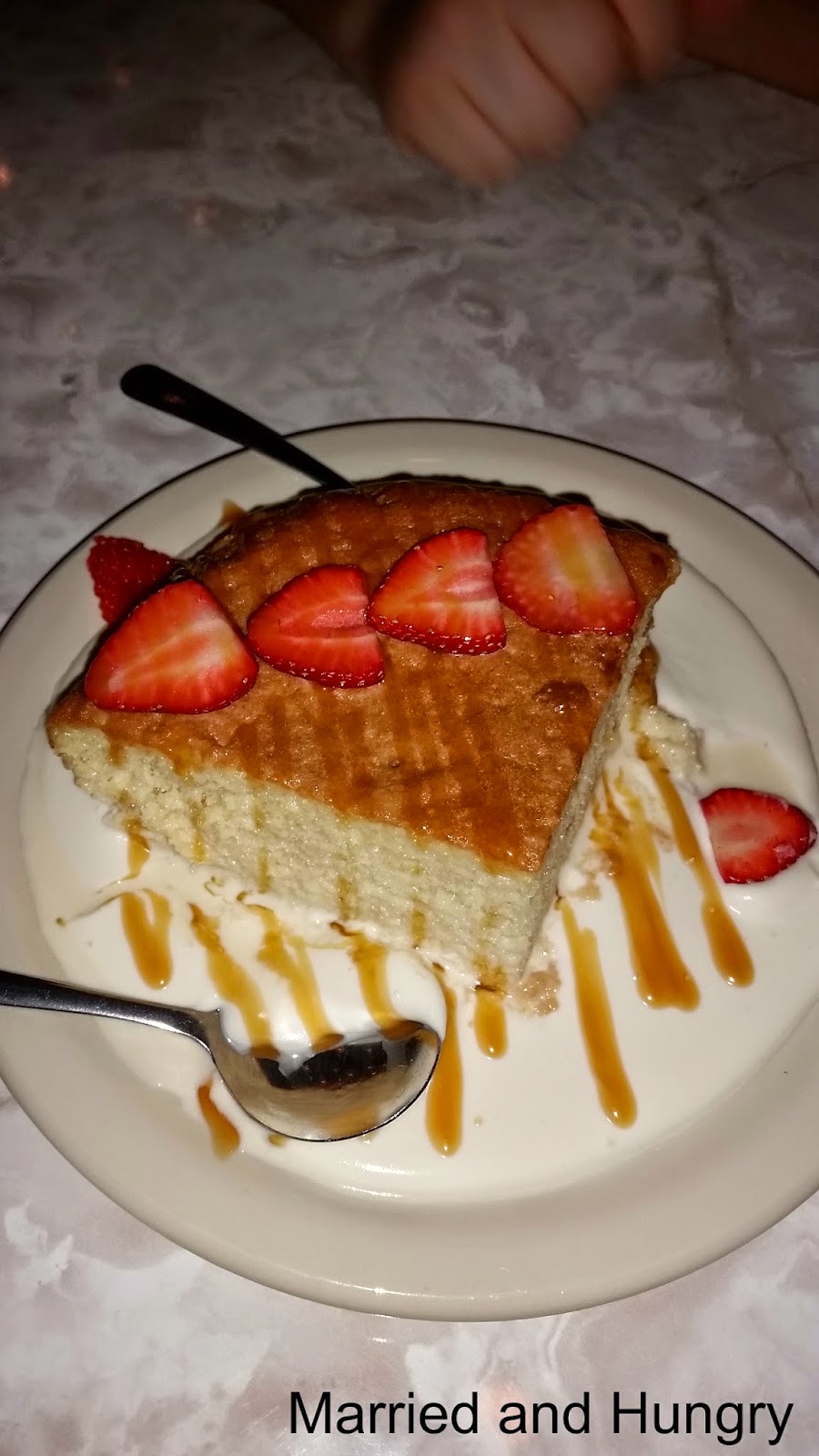 Chuy’s impressed me that day both with their food and their people. The management and even higher-ups are very nice and regular people that want their customers to love what they eat. The food being made fresh with beautiful fresh food, and being made all day long makes me so happy and wish more big chains did that. We were a bit skeptical before on Chuy’s just being alright for the price, but when you know what you are getting for that price it is so worth it. Chuy’s prides themselves in having amazing tasting food and it is their top concern, I love that about them.

So go eat at your closest Chuy’s as soon as you can, I promise you will not regret it! And if you are in the Central Arkansas area go see the new one in North Little Rock and enjoy the beautiful decorations and incredible food.