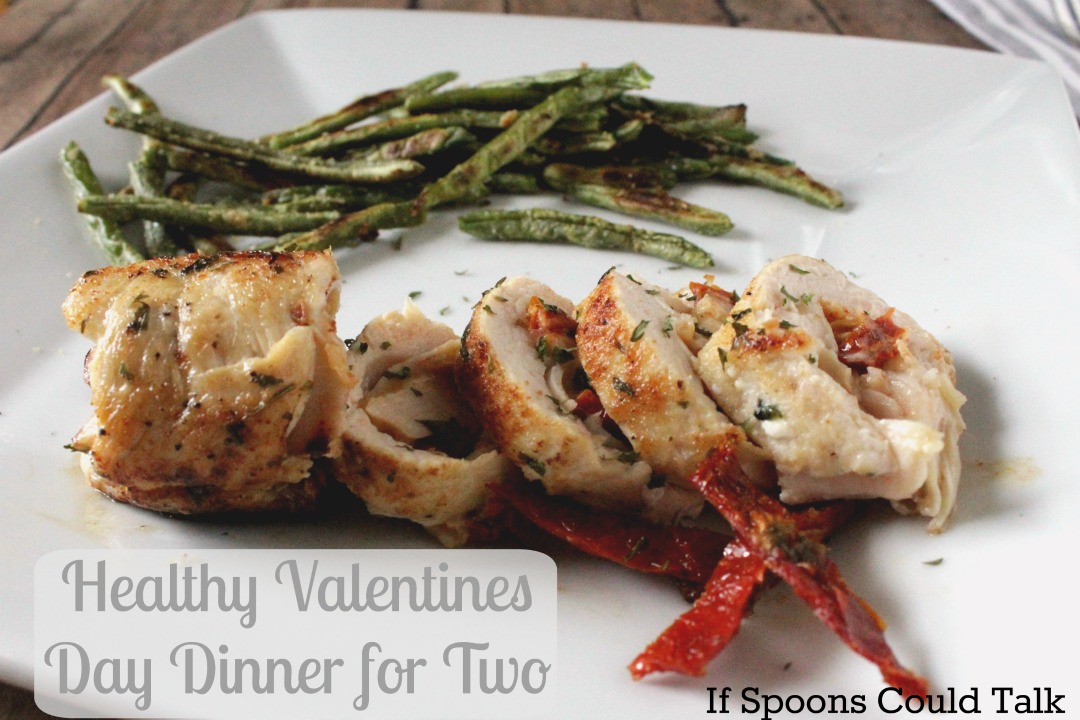 Each year Hubby and I rotate who plans Valentine’s Day and our Anniversary, this year I have Valentines Day and I am so excited. As I was thinking about what I wanted to do I realized that it is on a Tuesday this year, which can make going out for a big night or a special date. So I came up with a fast healthy dinner for two that can be ready in under an hour. So even for those of you with kids it is an easy dinner to prep and enjoy while they are watching a fun movie.

I even made it on the Trim Healthy Mama plan and the best part about this dinner is that it is a normal meal with no special ingredients.

I wanted to it to be simple to make but have the feel of something fancy. I went with a stuffed chicken breast because when they are cut they look so pretty and elegant, but in reality, they are super simple to make. To go with them I made simple roasted green beans recipe that is one of Hubby and I’s favorite. Serve them up with some skinny chocolate covered strawberries and you have a great dinner for two.

To make the chicken I took one breast and split it in half lengthwise. I flattened each piece out using plastic wrap and the palm of my hand. Then I laid a piece and a half of deli sliced turkey breast on it to cover the meat. Really you could use any sliced meat you want, the turkey was what we had and it turned out really good. Then I took about 6 sundried tomatoes and sliced them into thin strips. Tip: if you have a olive bar or some salad bars in a store near you, typically a Whole Foods or Kroger has them, then you can buy just a few at a time for a few cents instead of a jar that has a ton that if you are like me will never get used. I laid those out over each breast. I then took I then took shredded cheese and sprinkled a generous amount over each breast. I had fiesta blend on hand, which is also my favorite cheese to use, it has a mixture of Monterey Jack, Cheddar, Queso Quesadilla and Asadero Cheeses, and it is just yummy. Again you can use whatever kind you want or even sliced cheese. 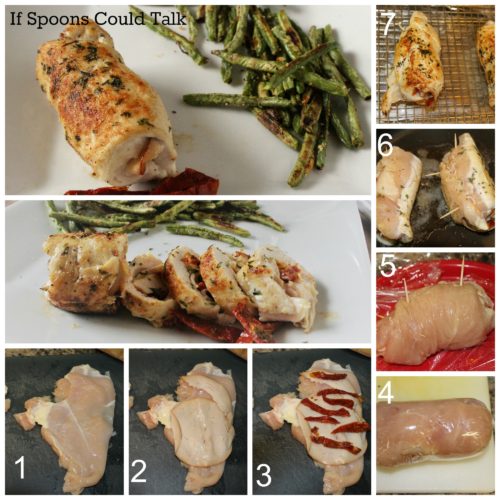 To roll them I laid each breast down on another sheet of plastic wrap and used it to help me roll. It was almost like a sushi type rolling technique. The main thing is to keep it tight and the plastic helps to get it all without having to have your hands all over it. Once they were rolled I wrapped the ends like you would twist a candy wrapper to keep it tight. I let them set up a bit in the refrigerator while I started the green beans. And then took them out, unrolled them and used tooth picks to make sure they held together while I cooked them.
I seasoned with garlic, onion powder, salt, pepper and parsley. The recipe below says 1 teaspoon each, and I used around that but I am bad about not measuring so it was a couple shakes each on both sides of the rolled breast. Season the way you like to, I feel there is no set rule on spices if you are used to cooking with them. If not stick to about 1 teaspoon and you will be good. Brown each side in coconut oil then finish in a 425°F oven for 15 minutes. 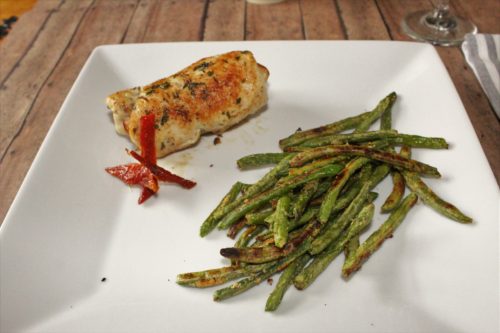 The green beans are super easy. While the meat is chilling cut the ends off or if they are frozen microwave with water for a few minutes. Toss them with seasonings and oil and lay out on a prepared pan. Put into a 425°F oven and bake for 20-25 minutes until the bottoms are a bit brown and smaller pieces have started to crisp up. 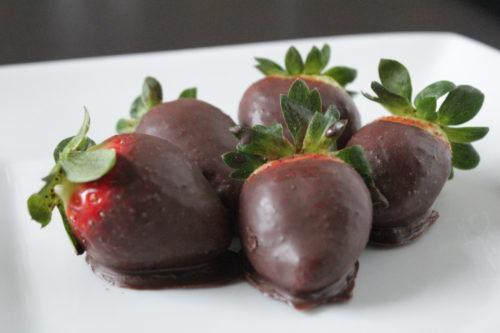 These pretties were made using skinny chocolate dipping into the chocolate right after mixing. Dipping two times, freezing for 10 minutes to set up and then dipping again to get a good coating. I will have my favorite recipe up next week for the skinny chocolate I make.  It is a slight varriation but it makes it taste so much better to me! 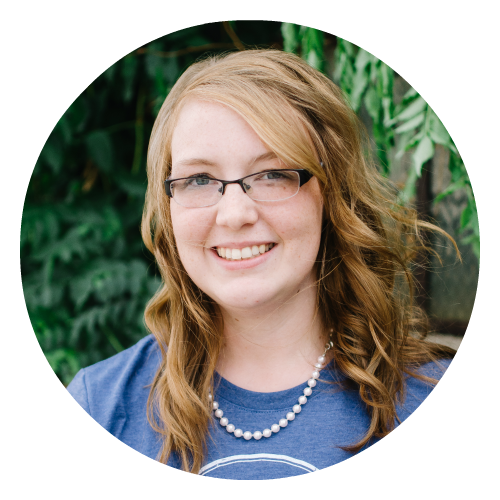